Scanning electron microscope (SEM) imaging is one of the most commonly used techniques to image the surface of samples in the nanometre to centimetre scale. Inside an SEM, the electron beam is scanned across the surface of the sample and the resulting signal is detected and used to build up an image. The interaction between the electron beam and the sample results in a number of different signals, and these can be detected using a variety of specialised detectors. The two most commonly detected signals are secondary electrons (SE) and backscattered electrons (BSE).

Secondary electron imaging is the most common imaging technique in an SEM. Secondary electrons, as the name implies, are electrons that have been ejected from the atoms in the sample itself, as opposed to the primary electrons in the incident electron beam. These are generally very-low-energy electrons (<50 eV), and so only those SEs that are generated very close to the sample surface will actually escape (typically from depths less than 20 nm). The shallow origin of SEs makes SE imaging a very surface-sensitive technique, ideal for imaging surface topography at a very high resolution (down to about 1 nm in field-emission SEMs).

In general, little sample preparation is necessary for SE imaging, although non-conductive samples usually need a conductive coat (typically carbon or a sputtered metal such as gold or platinum) to prevent surface charging. Alternatively some SEMs may be operated with a controlled level of gas in the chamber in order to dissipate the charge, although special SE detectors are needed for imaging in these conditions. This is dealt with in more detail in the environmental SEM (ESEM) section.

To achieve the best results when imaging biological samples, a more specialised sample preparation is necessary. This may simply involve coating with a metallic coat (to increase the yield of SEs and to improve the spatial resolution of the technique) but often more advanced techniques are required. Samples with significant moisture content need to be fixed and dehydrated prior to SEM analysis (unless using ESEM) to stop all cellular processes and immobilise any dynamic systems.. This is commonly achieved using chemical fixatives such as glutaraldehyde followed by dehydration through increasing concentrations of  ethanol. Critical point drying and other techniques such as freeze drying, chemical fixation or cryofixation can be used as well. More detailed descriptions about cryogenic techniques can be found in the cryo-SEM section.

Backscattered electrons are primary electrons (from the incident electron beam) that have been scattered back out of the sample. The proportion of the primary electrons that are backscattered out of the sample is dependent on the atomic number: elements with higher atomic numbers will have a higher atomic number appear brighter in the image. Therefore BSE imaging is sometimes referred to as atomic number (z) contrast imaging, and is used to image compositional variations in the sample. The spatial resolution of BSE imaging is dependent on the atomic number of the material (higher z gives better resolution) and the energy of the primary electron beam (lower accelerating voltage gives better resolution, but generally lower signal). The resolution typically varies from a few micrometres to as low as 10 nm. Topographic variations will also affect the BSE signal, and therefore many BSE detectors can be configured to generate topographic images. However, for the best z-contrast imaging, samples should be flat and, ideally, polished.

Crystalline samples, such as metals and minerals, can be imaged using BSEs to reveal changes in the crystal lattice orientation. This signal is caused by the channelling of the primary electrons into and out of the sample along the crystal lattice planes, although the level of signal is much lower than that due to z-contrast. This BSE imaging technique is known as channelling contrast or orientation contrast, and it can provide detailed images of grains, deformation, recrystallisation and localised lattice strain. For the best channelling contrast the samples should be very well polished (using a final stage of a fine diamond paste, colloidal silica, ion beam polishing or electropolishing).

There are a number of less common imaging techniques in SEM that provide additional information about the structure and composition of samples. The most well known are listed below.

Cathodoluminescence is the phenomenon in which a sample, when bombarded by an electron beam, emits light. The CL signal can be measured in the SEM by special detectors and is used to generate CL images. These images can provide a lot of information about small-scale chemical and structural variations. The wavelength of CL signals can also be measured and CL spectra acquired. More information is provided in a special section on cathodoluminescence (CL).

Electron beam induced current (EBIC), as the name implies, involves measuring the current produced in the sample when scanned by an electron beam. For most samples this will simply be an absorbed current (i.e. the current of the incident electron beam minus the current lost due to electrons escaping from the sample), and is known as absorbed current imaging. This can reveal variations in both chemistry and crystalline orientation, although BSE imaging is usually an easier and more effective technique. However, in semiconductors it is possible for the electron beam to induce a very small current to flow. Measuring the varying levels of this induced current using a picoammeter allows an image of the sample's surface to be produced – in effect a map of the electronic activity of the sample. This is a technique often used to image defects in semiconductors.

Charge contrast imaging is a special secondary electron imaging technique that can be used in variable pressure (VP) SEM or environmental SEM operation (see environmental SEM for more details). CCI is only possible on non-conductive samples, and occurs when insufficient positively charged gas ions are produced to dissipate the build up of charge on the surface of the sample. Local defects and chemical variations are highlighted in charge contrast images, and the images are in many ways similar to those generated by cathodoluminescence. The CCI technique is commonly used to image rocks and minerals, and wide-band gap electronic materials.

Forward scattered electron (FSE) imaging (often referred to a forescatter imaging) is a technique that detects BSEs that have been scattered down the surface of a steeply tilted sample. It is normally used in conjunction with electron backscatter diffraction (EBSD), in which the sample is typically tilted to 70° from the horizontal. FSE images, unlike normal BSE images, are dominated by orientation contrast (or channelling contrast), with little contribution from atomic number (z-) contrast. This makes it ideal for imaging grain- and sub-grain structures in polyphase materials, as well as being a perfect complement to the more quantitative EBSD technique. Samples need to be crystalline, flat and very well polished in order for FSE imaging to work. 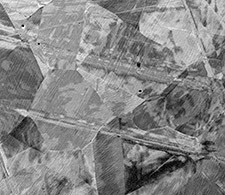 BSE image of a termite tooth showing the lighter zinc-rich regions at the tips.
Biofilm showing bacterial cells embedded in a matrix and imaged using secondary electrons in an SEM. 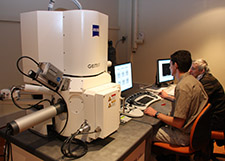 Training a user on an SEM.