A breakthrough at the University of Queensland has brought flexible solar ‘skins’ a step closer to reality.

A research team led by Prof. Lianzhou Wang has set a world record for the conversion of solar energy to electricity via the use of nanoparticles called ‘quantum dots’. When exposed to solar energy these dots pass electrons between one another generating an electrical current. The National Renewable Energy Laboratory in the US recognised the world record of 16.6% efficiency – the previous record in quantum dot solar cell category was 13.4%.

“The new class of quantum dots the University has developed are flexible and printable. This opens up a huge range of potential applications, including the possibility to use it as a transparent skin to power cars, planes, homes and wearable technology. Eventually it could play a major part in meeting the United Nations’ goal to increase the share of renewable energy in the global energy mix.

“This new generation of quantum dots is compatible with more affordable and large-scale printable technologies. The near 25% improvement in efficiency we have achieved over the previous world record is important. It is effectively the difference between quantum dot solar cell technology being an exciting ‘prospect’ and being commercially viable.”

As part of the research PhD student, Mehri Ghasemi used high-resolution transmission electron microscopy (HRTEM) at our facilities at the University of Queensland to study the interface quality and composition of the perovskite layer in the device structure. A focused ion beam was used to cut the sample to expose a cross-section of the device for imaging with HRTEM. The elemental distribution was then analysed in each layer using EDS. Along with this Mehri used SEM to gain an understanding of the structure of the quantum dots. In particular their size, shape and distribution on the surface of the film.

These cells have a wide range of applications even in less than desirable weather conditions.  “Essentially, we’ve developed solar technology that is British weatherproof. It can produce energy indoors or even when it is cloudy and wet.” says Prof. Wang. 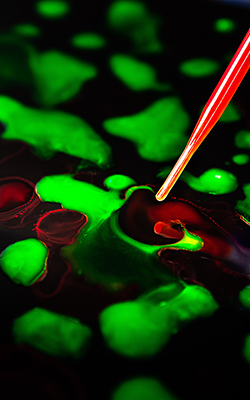 The work was funded by the Australian Research Council’s Discovery Programs in collaboration with a number of colleagues both in Australia and overseas.

Prof. Lianzhou Wang from The University of Queensland with his team