Pilbara rocks point to past life on Mars

3.5 billion year old fossils in Western Australia guide scientists on where to look for life on Mars.

The serious search for life elsewhere in the Universe is a rather infant endeavour for humanity. How do we formulate a search strategy and what questions do we ask? Since life on Earth was microbial for its first three billion years, we can begin with a deeper understanding of the history of life on this planet.

‘Extremophile’ microbes living on Earth today thrive in extreme conditions – hyper-hot, cold, salty, acidic – conditions too harsh to support more complex plant and animal life. Although we see no sign of complex life elsewhere in our solar system, we know of active and ancient environments that could support extremophiles. Mars is one example, as well as the moons of Jupiter and Saturn; Europa and Enceladus.

Rocks in the Pilbara region of north Western Australia preserve the oldest known fossilised life on the planet. Some of these are stromatolites – rock structures built by communities of micro-organisms. In the late 1970s geologists were excited to discover the oldest known stromatolites on Earth in a group of rocks called the Dresser Formation, located in the east Pilbara. Geologists continued investigating to interpret the ancient environment that supported these microbes.

Initial research suggested a quiet shallow-water marine setting such as the modern-day Shark Bay, WA. Later work by Prof. Martin Van Kranendonk’s research group at UNSW Sydney suggested it was actually a dynamic volcanic setting with large volumes of circulating volcanically heated water. This model raised interesting questions. Were the ancient microbes surviving in volcanically heated water, or were they simply growing in the quiet areas of the system, unrelated to hydrothermal activity?

The answer unfolded when Tara Djokic, working with Prof. Van Kranendonk and Prof. Malcolm Walter at UNSW, discovered the presence of geyserite directly interlayered with the stromatolites. Geyserite is a rock type that only forms at the edges of hot spring pools such as those seen today in Yellowstone National Park.

Electron microscopy in the Microscopy Australia facility at UNSW Sydney showed that very fine light and dark layers in the rock sample were composed of titanium dioxide and clays. These minerals aided in identifying the geyserite as they are known to precipitate from modern hot spring pools. The proximity of geyserite and fossil life allowed the researchers to conclude that life was flourishing in and around the edges of hot spring pools, approximately 3.5 billion years ago. The discovery of geyserite in the Dresser formation also showed that land-based hot springs were present on Earth around 3 billion years earlier than previously known. 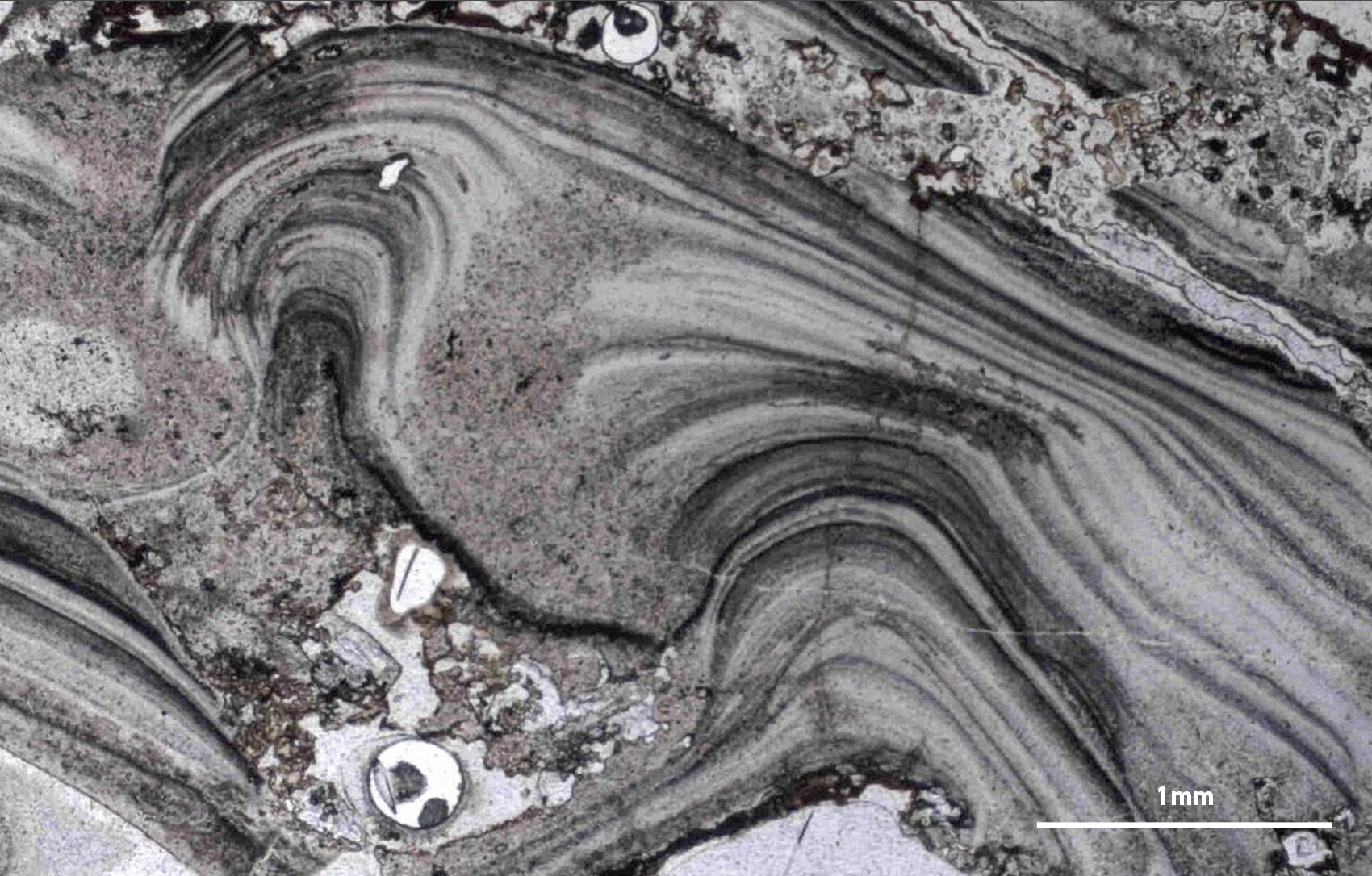 Thin section of geyserite showing the dark and light banding

The finding of 3.5 billion-year-old-life inhabiting land-based hot springs on Earth suggests a good place to start looking for signs of life on Mars would be around ancient hot spring rocks. In fact, many of the rocks on Mars are the same age as the Dresser formation and evidence of ancient hot springs has already been identified on the red planet.