Antibiotics have become our main go-to treatment for bacterial infections. However, with the rise of antibiotic-resistant strains of major disease-causing bacteria a new approach is needed.

Viruses that infect bacteria are called bacteriophages (often shortened to phages). Although they were used in the early part of the twentieth century before effective antibiotics were easily available, they fell out of favour as a treatment option. Phages can be purified to the point of being FDA-approved for treatment of people with bacterial infections, and documented success has been had in the USA, Europe and, recently, Australia.

A study done at Monash University by A/Prof. Fasséli Coulibaly and Prof. Trevor Lithgow in collaboration with the University of Cambridge, and published in Nature Communications, has used high-resolution cryo electron microscopy in the Monash University Microscopy Australia facility, the Ramaciotti Centre for Cryo-electron Microscopy, to uncover the structure of a phage that attacks and kills Salmonella Typhi, the bacteria that causes typhoid.

Most phages have icosahedral heads, which contain the phage’s DNA, and spinning tubular tails that both propel them through their environment and help them inject their DNA into the bacteria. These components are all complex assemblies of many proteins. It is therefore important to understand how they all get assembled to form the final whole phage and how they remain stable enough to withstand the forces they encounter at the nanoscale. The phage studied by the team has a 250 nanometre-long hollow tail, which is only around 15 nanometres wide with a 7nm wide passage down the middle for the DNA to pass through. This tail tube is made up of many copies of a specific protein arranged in a helix. The inside of this tube also encourages the movement of the DNA from the phage head and into the bacterial cell.

The fine detail observed by using the cryo-electron microscope revealed how the phage was constructed and the components that make it stable. This information can be applied to other similar phages, helping to identify the most suitable and robust types phage either for treating infections and for industrial applications. “We saw how the building blocks of the particle interlock in an intricate choreography. At a molecular level, arms swing out and curl around each other forming a continuous chain that braces the head of the phage,” A/Prof. Coulibaly said.

“This rigid chainmail provides further protection to the DNA of the phage. Surprisingly, the tail on the other hand remains flexible. It’s able to bend and not break as it captures the bacteria and ultimately injects them with the phage DNA.”

“This finding will help us overcome one of the most critical hurdles in phage therapies which is a precise understanding of how phage work, in order to predict in advance and select with accuracy the best phage for each patient infection,” Prof. Lithgow said. 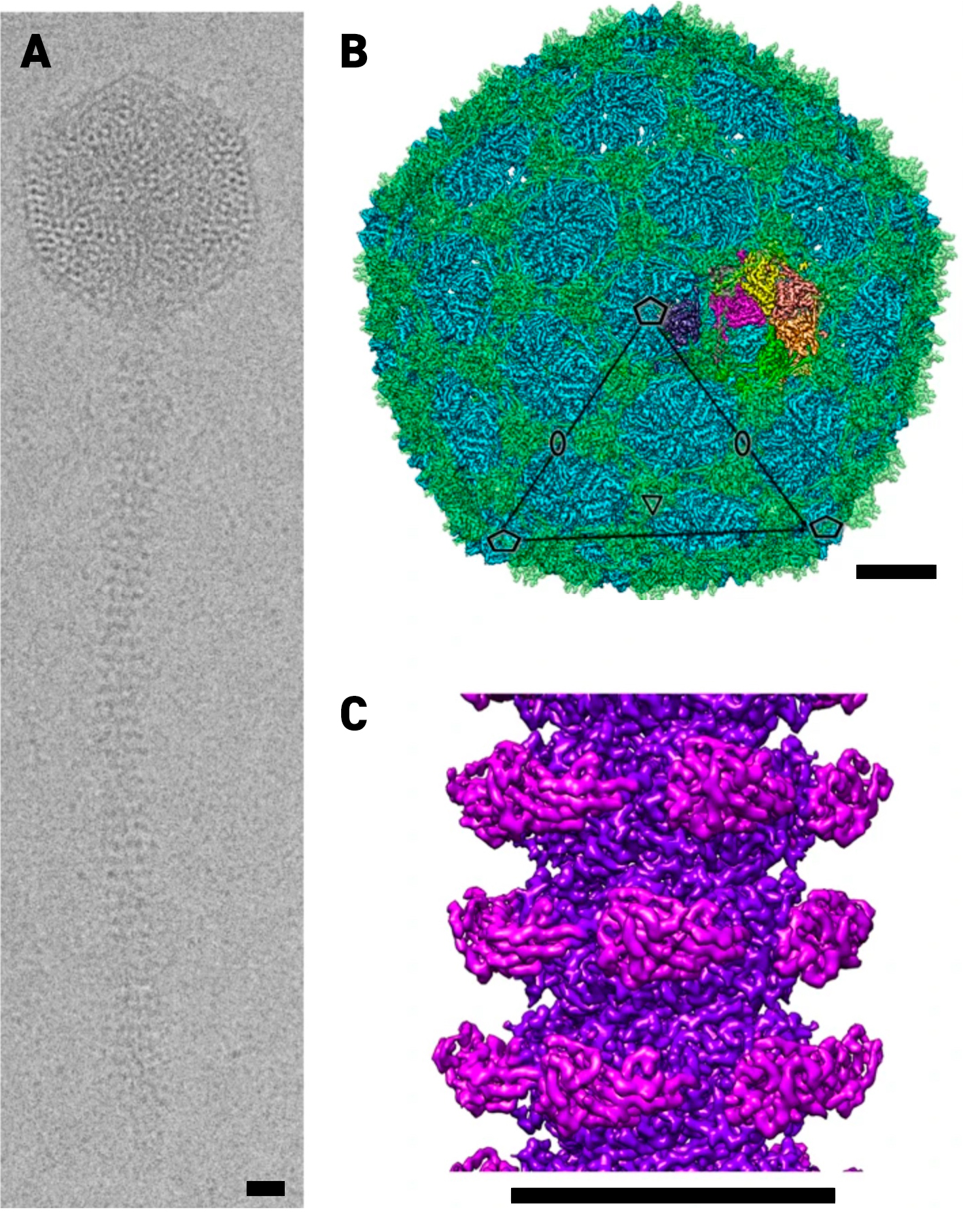 (a) Representative cryo-EM image of a phage. Cryo-EM reconstruction of the head (b) and tail tube (c).

Phage structure generated from Cryo-EM data. The single phage particle is a composite of 4 structures: the head, portal, tail and tail tip. These structures were computed from cryo-EM images of the intact phage particles.