Gelion: transformative battery technology that is scalable, affordable and safe

A scalable, affordable and safe alternative to lithium ion batteries made from zinc and bromine, commercialised by spin-out company Gelion Technology, recently had it’s first commercial installation at the University of Sydney.

Currently, any renewable energy supply needs backup for the times when ‘the wind doesn’t blow and sun doesn’t shine’. That back-up might be environmentally unfriendly, such as carbon dioxide generating gas turbines or oil and coalfired power plants.

Batteries are the obvious solution but current lithium-ion batteries are expensive, and geographically constrained lithium and cobalt supplies are problems holding back the pervasive switch to widespread battery use. Solid state lithium batteries do not have the capacity to work on the required scale and are prone to combustion.

Zinc and bromine are safe, cost-effective, long-life alternatives to lithium: they are inexpensive and globally well distributed. Zinc-bromine flow batteries are cheap, can safely operate at temperatures up to 1000 degrees, and are scalable. However, they also come with challenges. They hold their energy in an electrolyte solution making flow batteries non-portable and inflexible. Elemental bromine can dissolve skin, making it dangerous to handle. Because of these issues, the flow batteries are mostly used for niche applications such as powering army bases.

In a world first, a team led by Prof. Thomas Maschmeyer at  the University of Sydney, has found a way to make zinc–bromine batteries more like solid state batteries by working at the nanoscale. “We’ve been able to encapsulate the bromine in a nano-gel in such a way that it is still chemically aggressive,” he says. “But now I can put my finger into the gel and I just have to rinse it off to remain perfectly fine – we tamed the tiger.” This discovery was enabled by scanning electron microscopy at our University of Sydney facility, Sydney Microscopy and Microanalysis. The batteries have been dubbed ‘Endure batteries’.

The cost of energy storage is maximised by the Endure battery’s low fade capability even at high temperatures, which is a fundamental issue for other battery technologies. It has many additional advantages including the ability to daily cycle at 100% depth of discharge (DoD) and operate at temperatures up to 50°C, without requiring costly air-conditioning systems. The battery is abuse tolerant; it can be discharged to zero Volts repeatedly without harming its performance, making it ideal for off-grid unmanaged environments.

Along with being safer, this gel allows the zinc-bromine batteries to be treated like solid-state lithium batteries making them much more portable and easier to work with. They also come with the benefits over lithium batteries of being significantly cheaper, fire retardant, and continuing to work at high temperatures. The other significant advantage of this battery cell is that it can be assembled into modules in the sizes needed; small for use in solar street lights, or very large for powering communities.

Gelion launches Endure Batteries, their first commercial product. Prof. Maschmeyer said: “Our Endure batteries have a significant advantage in the Australian market, where off-grid battery demands can be very challenging. Endure can operate at high temperature without air-conditioning. The batteries by themselves cannot catch fire as the materials are highly flame retardant. This means the technology can be deployed in the mining and agriculture industries as well as in remote settlements where mains power is not readily available.” 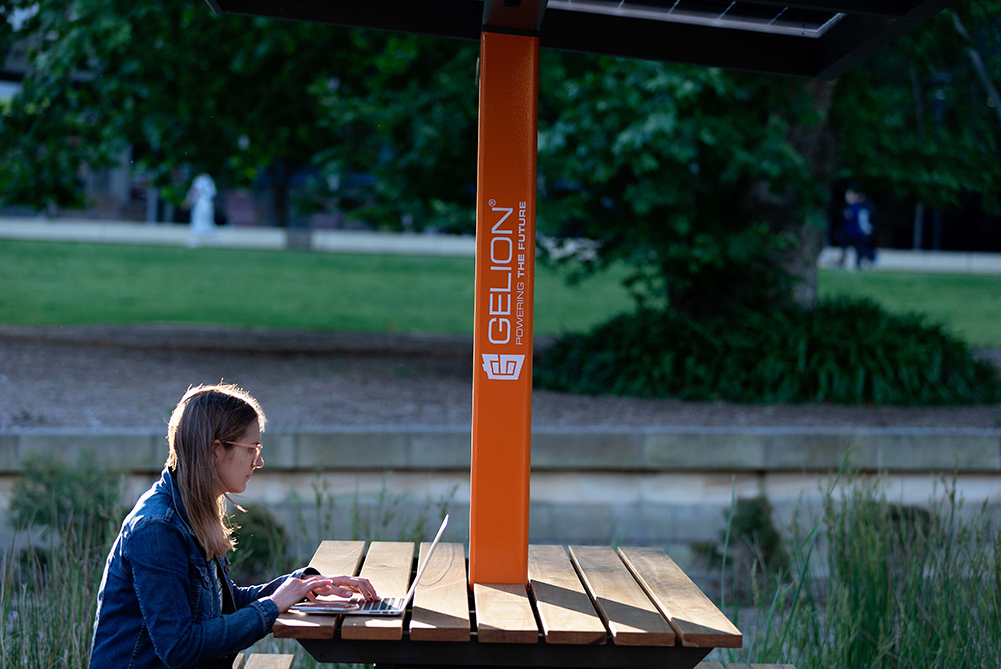 The first commercial installation of Endure batteries powers smart solar outdoor study spaces at the University of Sydney. “We want to be part of the global energy transformation under way,” Vice-Chancellor Michael Spence said. “Gelion’s technology is well placed to provide low-carbon, renewable storage solutions for an energy-hungry world.”

Gelion Technologies and lead-acid battery maker Battery Energy Power Solutions announced a partnership to manufacture the former’s batteries in Australia. Scale up to full production is announced for late 2022.

An MOU was signed with Mayur Renewables, a subsidiary of Mayur Resources a major energy supplier in Papua New Guinea, to supply100MWh of zinc-bromide non-flow batteries over the next five years.

Gelion then listed on the London stock Exchange in December, 2021.

In 2021, they also produced a fully mobile desalination trailer that is powered by 16 Endure batteries and an array of solar panels. It produces 110 litres of clean water an hour from brackish water sources, such as stagnant bores, that can be pumped to where fresh water is needed demonstrating how the batteries can work alongside solar to solve real-world challenges.