The start of 2020 was marred by extreme bushfires and drought. It was a visceral reminder of the future we face if we fail to reduce our carbon emissions. Electricity production is Australia’s single largest source of emissions, and also one of the easiest to reduce. We are a country blessed by sun. However, until solar technology becomes more competitive in cost and efficiency it will be hard to justify replacing existing energy infrastructure and the jobs associated with it.

Australian Universities are leading the world in technical innovation in solar, making it increasingly viable. Here are just three of the many solar projects around the country supported by our microscopy over the past year. The researchers have produced record solar efficiencies using novel technologies. 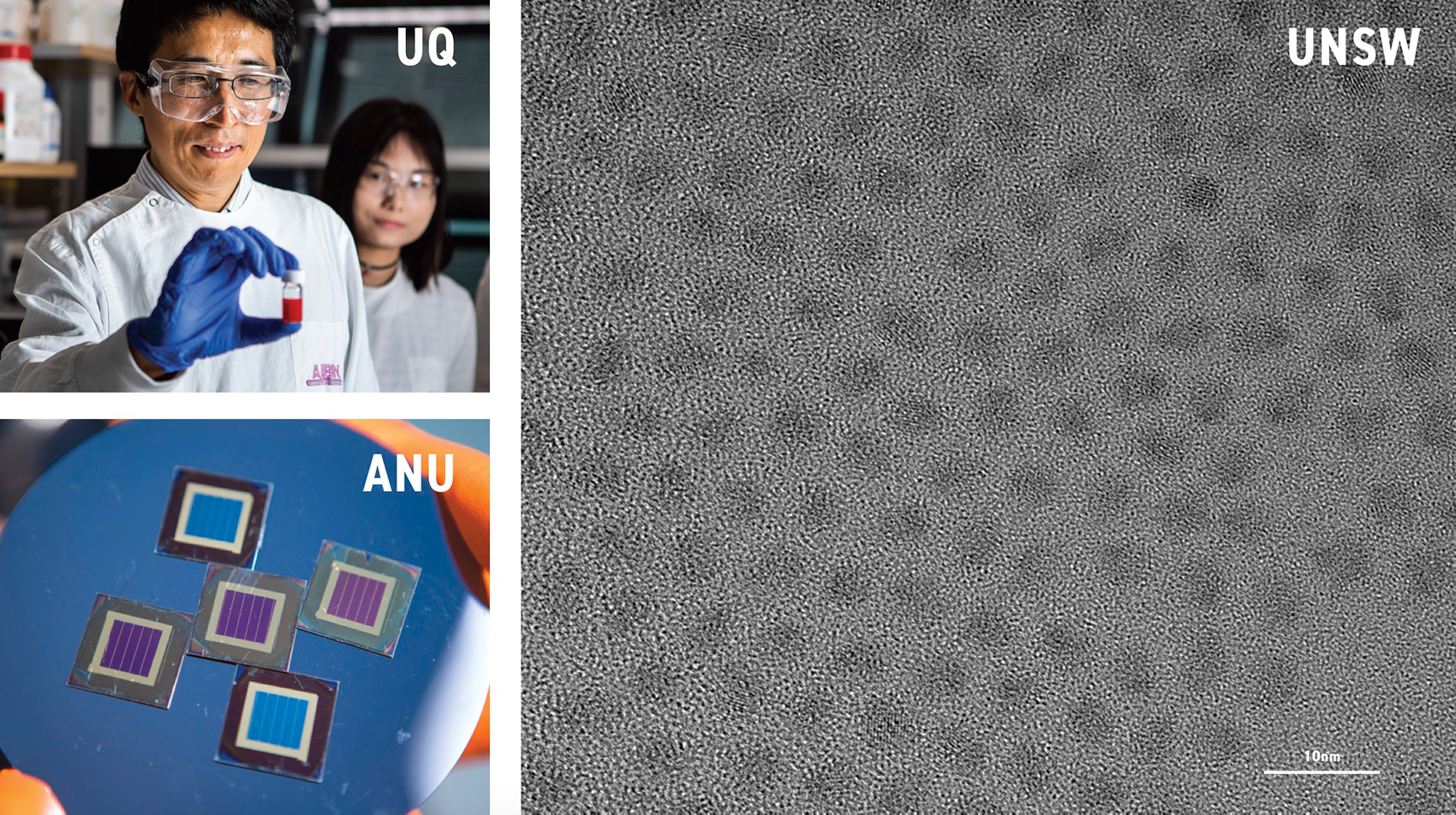 A research team led by Prof. Lianzhou Wang at the University of Queensland has set a world record for the conversion of solar energy to electricity by using nanoparticles called ‘quantum dots’.  Unlike the stiff and brittle silicon wafers that are used in common household solar panels today, quantum dots are both flexible and printable. This gives them the potential to be made into transparent films that could be applied to everything from cars, planes and buildings to wearable electronics. They also have greatly improved performance compared to traditional solar cells in cloudy, wet and low light conditions, even indoors. Read more about this research.

Squeezing more energy out of sunlight is another approach to increasing the efficiency of solar cells. In a world first, researchers led by Prof. Tim Schmidt from UNSW Sydney, along with global collaborators, have been able to ‘upconvert’ low energy light into higher energy light by using oxygen and quantum dots. Currently, silicon solar cells can only capture frequencies of near infrared or higher. The research team used semiconductor quantum dots to absorb the lower energy light, and molecular oxygen to transfer that energy to organic molecules, where it accumulates and can then be re-emitted in the visible spectrum where it can be captured by the silicon. This discovery could significantly improve the efficiency of silicon solar cells, the most widespread solar cell type in production. It would also improve charge-coupled device cameras and photodiodes. Read more about this research.

Researchers at the Australian National University and Flinders University, led by Prof. Kylie Catchpole have also set a world record for the capturing more of the sun’s energy, this time by using perovskite–silicon ‘tandem solar cells’. These stack newer generation perovskite solar cells on top of silicon solar cells. Perovskite is efficient at converting the blue portion of sunlight into electricity while silicon converts mostly the red portion. This achieves significantly higher efficiency than either cell could achieve on its own. They achieved an efficiency of 27.7%. At the moment, typical solar panels being installed on rooftops have an efficiency of 20%. Read more about this research.