Cheaper, more-efficient and less-toxic batteries for cars and homes maybe be on the horizon thanks to an unexpected ingredient: glucose.

Electric vehicles, mobile phones and other consumer electronics mostly use lithium-ion batteries that were commercialised in the 1990s. They’re made using toxic materials such as cobalt, nickel and manganese that are in increasingly short supply around the world.

Lithium–sulfur batteries are an emerging alternative that use cheaper, more abundant materials and are able to store two to five times more energy per kilogram than lithium-ion batteries. However, they degrade rapidly through the recharging process. A solution to this problem needs to be found for lithium–sulfur batteries to be viable.

A team from Monash University led by Prof. Mainak Majumder have found a way of making lithium–sulfur batteries that are robust enough to be recharged 1000 times.

In a lithium–sulfur battery, energy is stored when lithium ions are absorbed by an electrode made of sulfur particles. The electrode swells up to almost double its size when it is fully charged, then shrinks as it’s discharged. This expansion and contraction caused by the cycle of charging and recharging weakens and distorts the electrode. This reduces the battery’s performance and limits the number of recharge cycles to around 50 compared to around 1000 for lithium-ion batteries.

When looking for a solution, PhD student Yingyi Huang found a geochemistry paper published in the late 1980s describing how sugar can help soil retain sulfur compounds. Inspired by this, the team tried adding glucose to the sulfur electrodes in the battery and found that they became much more stable. The electrode also became more open, facilitating the interaction between the lithium ions and the sulfur, which in turn, improved performance, increasing the battery’s durability to 1,000 cycles; a twenty-fold improvement over the original batteries. The team are now exploring additives to increase durability even further.

Scanning electron microscopy, elemental analysis and focused ion-beam techniques at the Microscopy Australia facility at Monash University, Monash Centre for Electron Microscopy, allowed the team to understand the structural and functional changes in the different types of electrodes. 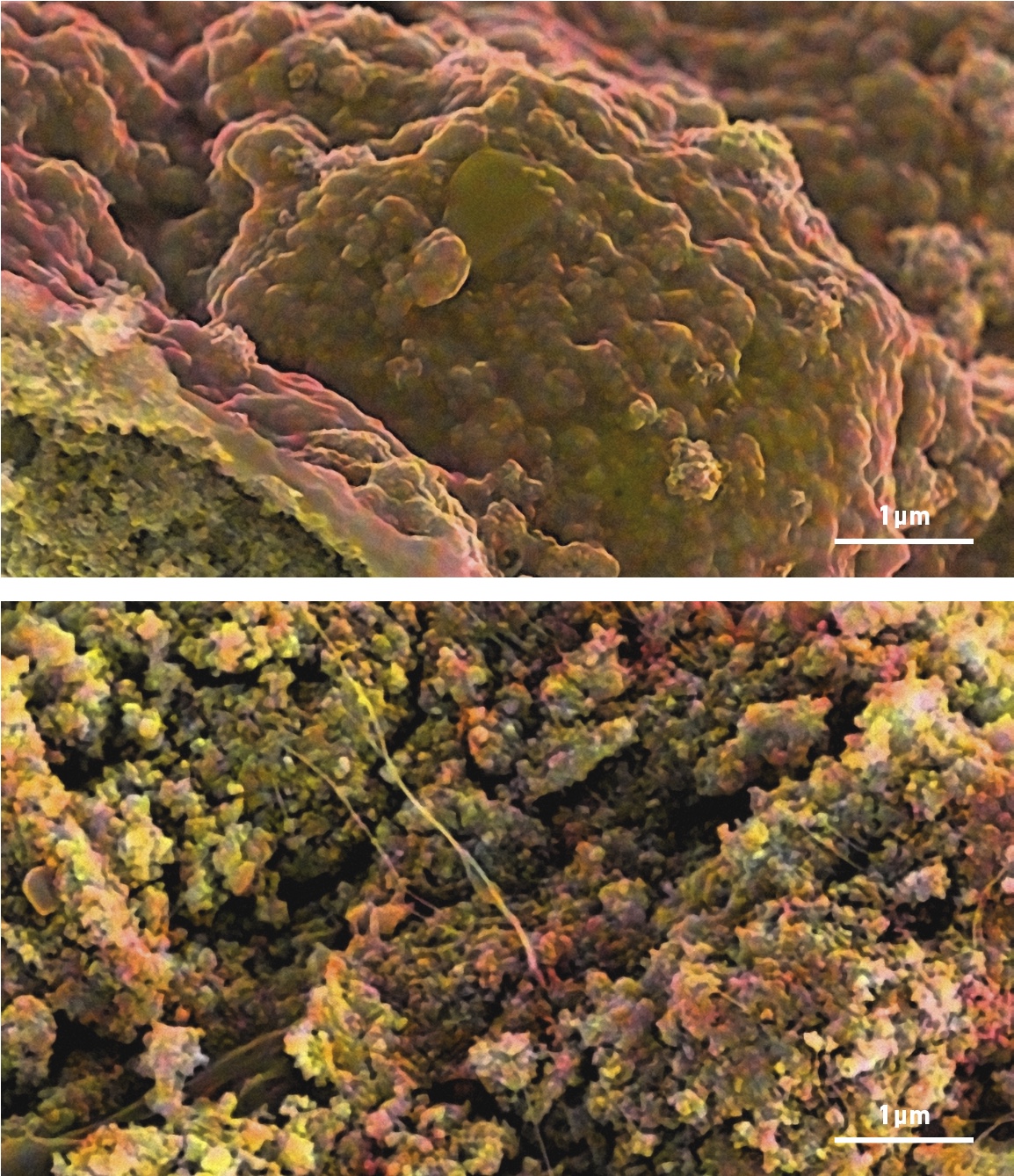 Scanning electron microscope images, overlaid with an elemental map showing the structural differences in electrodes with (bottom) and without (top) glucose. Without glucose the binding material (red) covers the sulfur (yellow), whereas with glucose, the structure is more open and more sulfur is exposed so it can interact with lithium.

When commercialised, lithium–sulfur batteries will have several benefits over lithium-ion:

A/Prof. Glushenkov, from the Australian National University’s Battery Storage and Grid Integration Program, who was not involved in the research, said “I do believe there will be a prototype that will be usable in five to 10 years.”