Nanoparticles are being widely investigated for diverse roles in medicine, including as carriers to deliver drug molecules into cells, and as components of diagnostic tests and sensors. Lots of work is being done to understand how cells respond to nanoparticles and to determine whether they are a safe new treatment strategy. Gold nanoparticles and nanorods are two of the most studied inorganic nanoparticles. They are known not to be toxic when introduced into cells, but some studies have reported changes in gene activity following exposure to gold nanorods. This could have major implications for health. Genes are switched on and off in the cell’s nucleus but gold nanorods don’t enter the nucleus. How then are genes being affected?

An international group of researchers led by Prof. Swaminathan Iyer and Dr Nicole Smith at the University of Western Australia (UWA) have targeted this question. Chemical processes are used to attach other molecules, such as drugs, to the gold nanorods and nanoparticles. These processes were explored as possible culprits. The chemically modified nanorods and particles were introduced into cells and analysed by NanoSIMS, transmission electron microscopy and X-ray photoelectron spectroscopy in the Microscopy Australia facility at UWA. 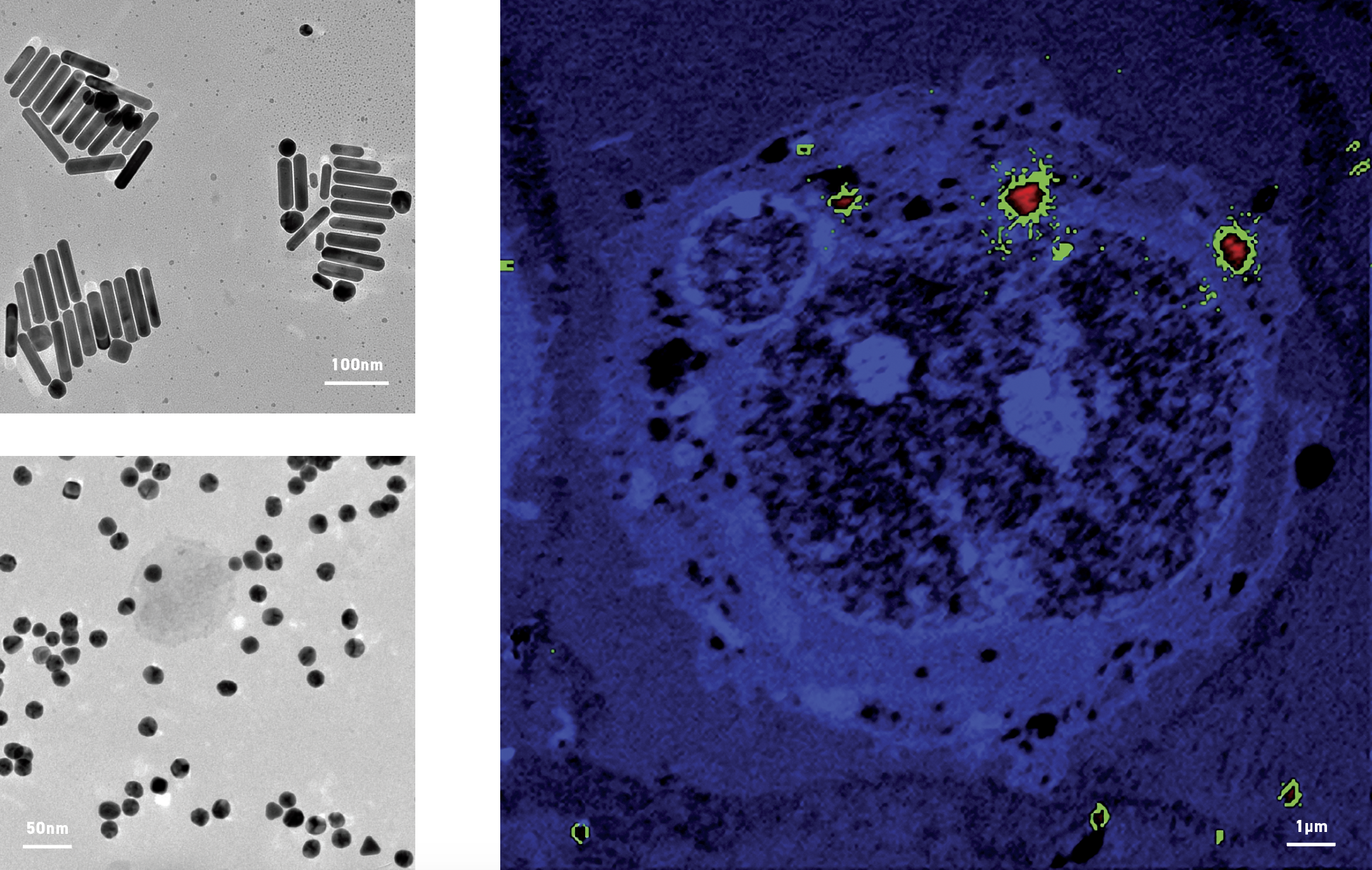 Left: Transmission electron micrographs of gold nanorods (top) and nanoparticles (bottom). Right: NanoSIMS image of a cell containing gold nanorods and showing the concentration of gold represented by a colour gradient with red being very concentrated and green being less concentrated. Blue areas contain no gold. The large, round, dark area in the centre is the nucleus and some gold can be seen inside it.

Results showed that soluble (ionic) gold can diffuse off the ends of the chemically modified gold nanorods much more readily than it does off similarly modified round gold nanoparticles. While the modified nanorods are inert when they are produced in the lab, their chemistry changes into a more reactive form once they get inside the cells. These reactive nanorods release soluble gold that travels to the nucleus. Once inside, the gold induces the DNA to form what are called DNA G-quadruplex structures. Positively charged ions like gold are known to stabilise these structures. DNA G-quadruplexes appear to be involved in many DNA functions including switching genes on and off, replicating DNA and rearranging genes.