MicroCT reveals surprising link between the cassowary and other primitive birds

Flinders researchers have filled a gap in knowledge by using micro-CT to create 3D models of cassowary throat structures. This allowed them to shed light on evolutionary relationships within the cassowary’s ancestral group, a source of contention in the academic community.

The colourful southern cassowary, Casuarius casuarius, the second largest living bird and a close relative of the emu, has been studied for hundreds of years. However, their solitary nature in the dense rainforests of northern Queensland has ensured that many fundamental aspects of these animals continue to elude scientists.

Almost all living birds belong to the evolutionary group Neognathae. However cassowaries, along with other ancient and mostly flightless birds including the moa, tinamou, emus and ostriches, belong to the oldest branch among all birds, the palaeognaths.

The word paleognath means “old jaws” in reference to the skeletal anatomy of the palate, which is more primitive and reptilian than those in other birds. Previous research into these mouth and throat structures, in particular the syrinx and hyoid, have shown they are valuable for determining evolutionary relationships among Neognathae, suggesting they would also be informative for working out the palaeognath evolutionary tree, which exhibits conflicts between trees created using genetic data, and trees created using anatomical data.

To overcome this, PhD student Phoebe McInerney from Flinders University used micro-CT at our facility, Adelaide Microscopy, to scan and generate 3D models of the cassowary’s syrinx, hyoid and larynx. For the first time, this allowed researchers to examine and compare these structures to other paleognaths.

“Scanning lets us see details that we wouldn’t be able to otherwise, including the shapes of internal structures, without causing damage to them,” says Ms McInerney. 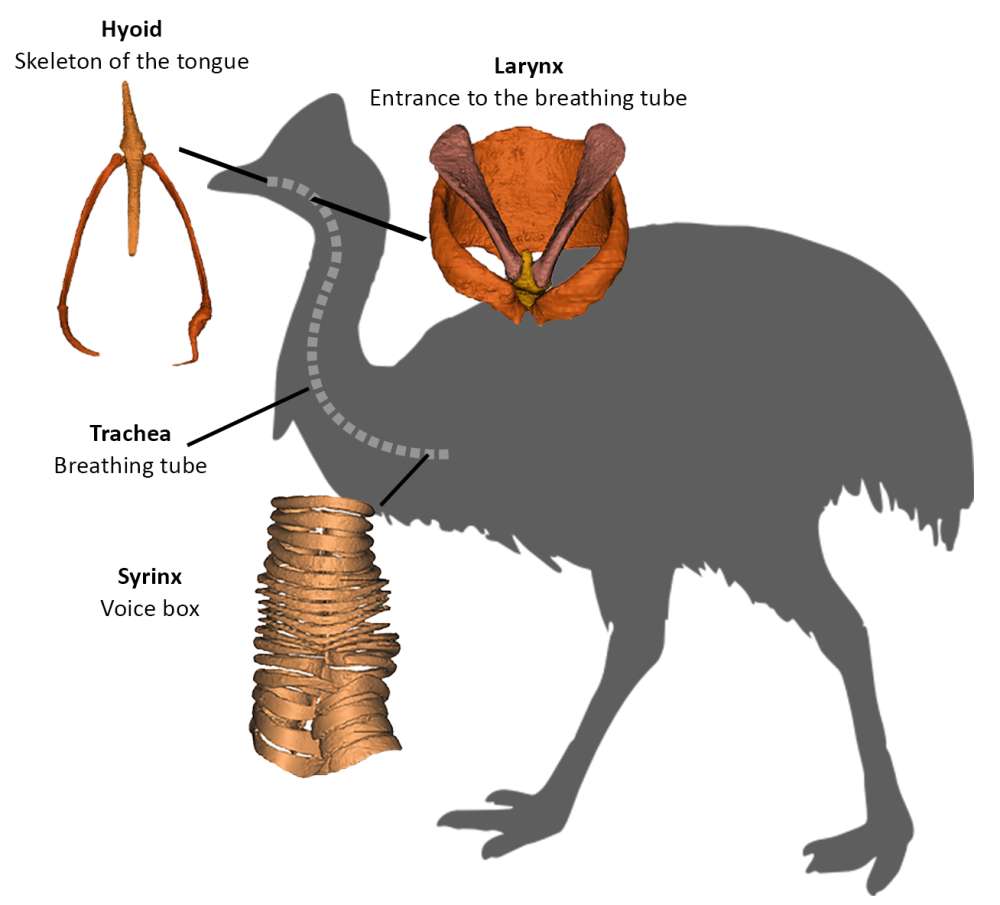 Diagram shows the 3D models generated from micro-CT data of cassowary anatomy and the locations the samples came from created by McInerney.

What stood out most after examining the scans was that there were notable differences between the moa and the cassowary. This was surprising considering they come from such a small evolutionary group and are superficially very similar birds in a similar geographic location.

This revelation lead McInerney to question if other paleognaths might have hidden morphological differences or similarities that could shed light on apparent contradictions between genealogical and morphological evolutionary tress.

In particular, recent analysis of DNA of the moa and tinamou concluded that are each other’s closest relatives. However, these results were met with scepticism: the moa was huge and flightless and located in New Zealand, and the tinamou is a small, flighted partridge-like bird native to South America. On examining their throat structures McInerney found they were very similar, despite significant superficial physical and geographical differences, providing the first morphological evidence of the moa and tinamou being each other’s closest relatives. Because these throat structures showed much stronger conformity with DNA analysis than other traits (size, flightlessness, geographical distribution etc.) the structures are more likely to have been inherited from an ancestor, than caused by adaptation. This makes them a new, more accurate target for determining anatomical evolutionary links between Paleognathae.

The results have been published in the international journal BMC Evolutionary Biology.

“Scanning lets us see details that we wouldn’t be able to otherwise, including the shapes of internal structures, without causing damage to them,” says lead author on the paper, Phoebe McInerney.

The authors acknowledge the support of Adelaide Microscopy and Dr Jones and Partners, and experts and analysis from the Museum of New Zealand Te Papa Tongarewa (Wellington, New Zealand) and Museo de Historia Natural de La Pampa (Santa Rosa, Argentina) for comparisons with other palaeognaths.

The open access article, ‘The phylogenetic significance of the morphology of the syrinx, hyoid and larynx, of the Southern Cassowary, Casuarius casuarius (Aves, Palaeognathae)’ December 2019, by PL McInerney, MSY Lee, AM Clement and TH Worthy, has been published in BMC Evolutionary Biology (Springer Nature) Vol 19, Article 233 DOI: 10.1186/s12862-019-1544-7