Using microscopy, researchers have been able to unravel how glutamate, an important signalling chemical in the brain, is transported revealing a new therapeutic target for treating diseases such as episodic ataxia and Alzheimer’s.

Brain cells communicate through chemical signals that pass from one cell to another. One of the major signalling chemicals is glutamate. Its movement in and out of cells is controlled by a protein called a glutamate transporter that works like a molecular machine, moving glutamate through the cell membrane. But this protein also has a separate important function: to transport chloride ions.

This glutamate transporter is involved in nerve signalling, metabolism, learning and memory. So, understanding the details of how it works is crucial in understanding how the brain works. It also helps to inform the design of precisely targeted drugs to treat and modulate brain disorders from movement problems to Alzheimer’s disease.

Although the mechanism for glutamate transport has been known for some time, the way chloride ions are transported remained elusive. Researchers led by Prof. Renae Ryan at the University of Sydney, had been implementing X-ray crystallography to try and understand the location and nature of the chloride channel for many years without success. Instead, in collaboration with colleagues at the Victor Chang Cardiac Research Institute, UNSW Sydney (UNSW), they tried a new approach.

The team turned to the Microscopy Australia facilities at UNSW, where they used their co-funded cryogenic electron microscope (cryo-EM) to successfully determine the 3D structure of the protein in a state where chloride ions can pass through. Cryo-EM revealed that the protein took two forms in the same sample, explaining why X-ray crystallography, which requires a single form, was unable to resolve its structure. These two structures could be distinguished in the cryo-EM data using sorting algorithms implemented in single particle analysis. One of the structures observed in this sample contained the chloride channel and computer simulations performed by collaborators in the USA revealed the principles of chloride translocation. 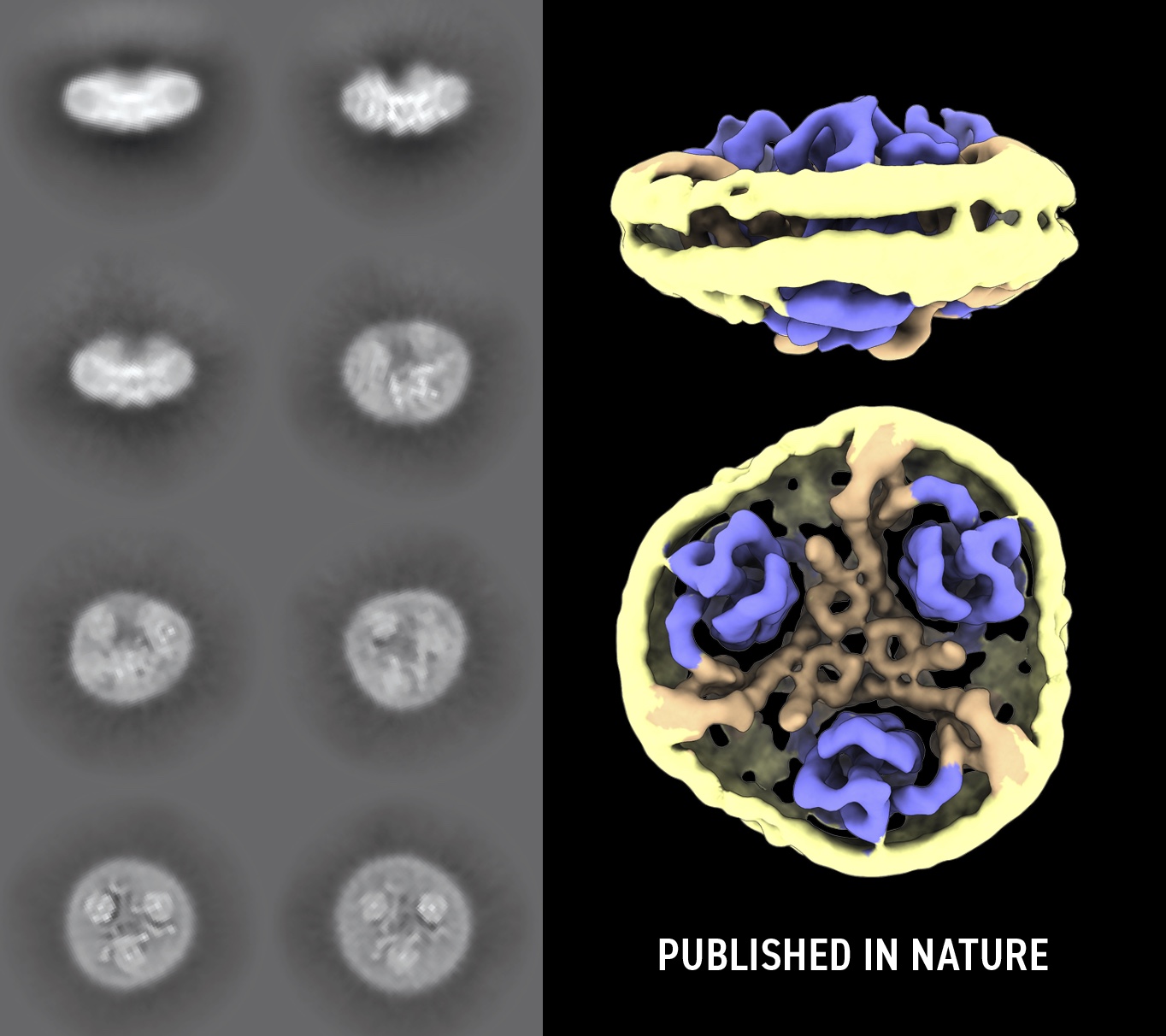 Panel of 2D classification images (left) used to create the 3D reconstruction (right) of the glutamate transporter trimer (blue and brown) in a lipid nanodisc (yellow). This mimics how the transporter sits in the cell membrane. This whole complex is 11nm across.

“Using cryo-EM, we have uncovered for the first time just how these transporters can multitask: carrying out the dual functions of moving glutamate across the cell membrane while also allowing water and chloride ions through at the same time,” said senior researcher Prof. Renae Ryan.

“Understanding how the molecular machines in our cells work enables us to interpret defects in these machines in disease states and also gives us clues to how we might target these machines with therapeutics,” says Prof. Ryan.

Rare diseases such as episodic ataxia, a disease that impacts movement and causes periodic paralysis, is caused by an uncontrolled leak of chloride through the glutamate transporter in brain cells.

Effective treatments for the diverse conditions influenced by the glutamate transporter could have a huge impact on health care costs, quality of life and productivity for the tens of millions of people worldwide living with Alzheimer’s disease and the impact of stroke alone.

“Understanding the glutamate transporter structure, which controls the normal flow of chloride, could help design drugs that can ‘plug up’ the chloride channel in episodic ataxia,” says researcher Dr Qianyi Wu.

Cryo-EM 3D reconstruction of the glutamate transporter trimer (blue and brown) in a lipid nanodisc (yellow).