Mummy under the microscope: who was she?

A cedar coffin in the Chau Chak Wing Museum at the University of Sydney, belonging to a high priestess named Mer-Neith-it-es, is stylistically dated to the Egyptian 26th Dynasty (664-525 BC). Gifted to the Museum by Sir Charles Nicholson in 1860, it was long thought to be empty.

However, in an astonishing discovery in 2017, the coffin was found to contain the remains of a heavily disturbed individual along with linen bandages, hardened resin and thousands of small beads from a degraded beadnet. To learn more about the individual inside, and discover if it is Mer-Neith-it-es, researchers carefully recorded and removed the contents and used a suite of scientific techniques for their analysis. 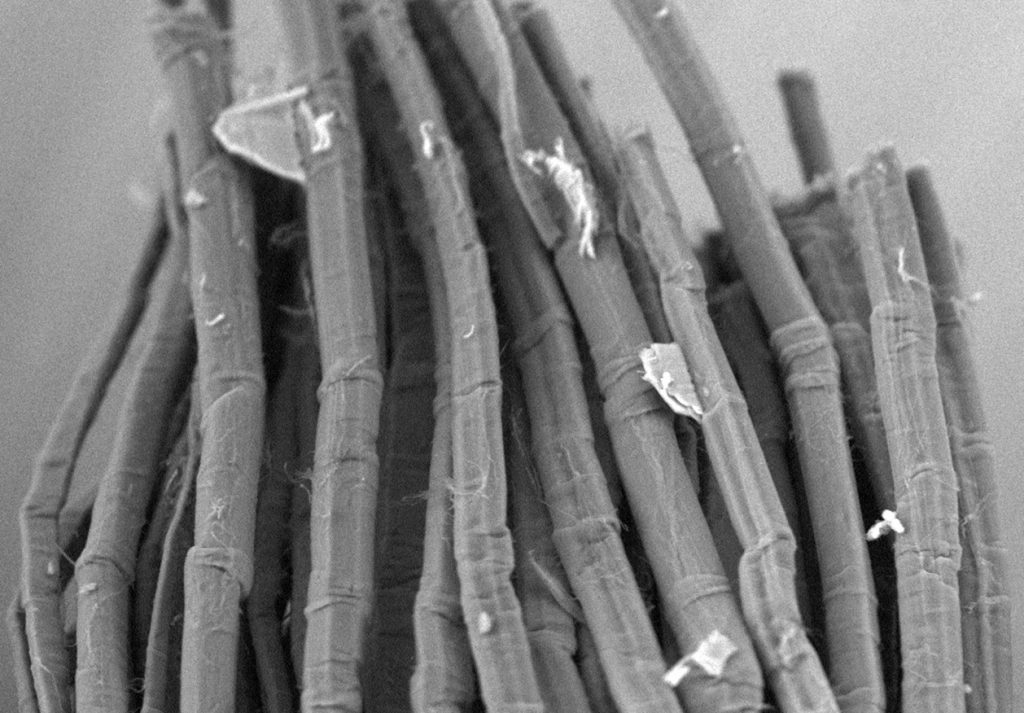 SEM image of linen fibres from the mummy wrappings

Dr Karen Privat from the Microscopy Australia facility at UNSW Sydney examined the structure and composition of fragments of the mummy wrappings by using variable-pressure scanning electron microscopy (VP-SEM) and elemental analysis (EDS). This allows precious non-electrically conductive materials such as textiles, paint, glass and wood, to be imaged without needing to be made conductive with gold or platinum beforehand.

Results clearly showed that the threads are linen. They had a plain weave and although they were of good quality, they were not the finest seen at that time. The EDS results showed the presence of sand and mineral salts on the inner wrappings, which, coupled with examination by textile expert Dr Glennda Marsh-Letts, suggested that the linen had been used previously before becoming mummy wrappings. In ancient Egypt, it was usual for household linen and clothing to be used for burial wrappings to save on mummification costs. This is typical of a non-royal burial. The results above, viewed together with carbon dating that showed the contemporaneous dates of the coffin and its contents, and the historical analyses, are consistent with the remains belonging to Mer-Neith-it-es.