It remains a modern day frustration that smartphones operate on batteries that require frequent charging. This could be overcome if smartphone batteries could be recharged throughout the day using light while continuing to be lightweight and portable.

Dr Yung Hau Ng and Prof. Rose Amal at the University of NSW (UNSW) are developing solar battery technology that could enable direct recharging of mobile phones using light, and without the need to mount solar panels onto the battery or the device. Their design is an all-in-one solar powered and energy storing device. It is based on a thin film electrode of molybdenum trioxide (MoO3) interfacing with an electrolyte rich in sodium ions.

The MoO3 layer acts as both a solar cell and a negative battery terminal. Rather than using the power supply to charge the battery, the solar-rechargeable battery uses light energy to dislodge electrons from the MoO3 layer. This draws sodium ions into the MoO3 layer, where they are stored, thus charging the battery. When the battery is in use, the sodium ions and electrons are released, producing current to operate the phone.

This system is distinct from those where light harvesting and energy storage are realised, with limited efficiencies, by separate or hybrid technologies such as solar cells and batteries. 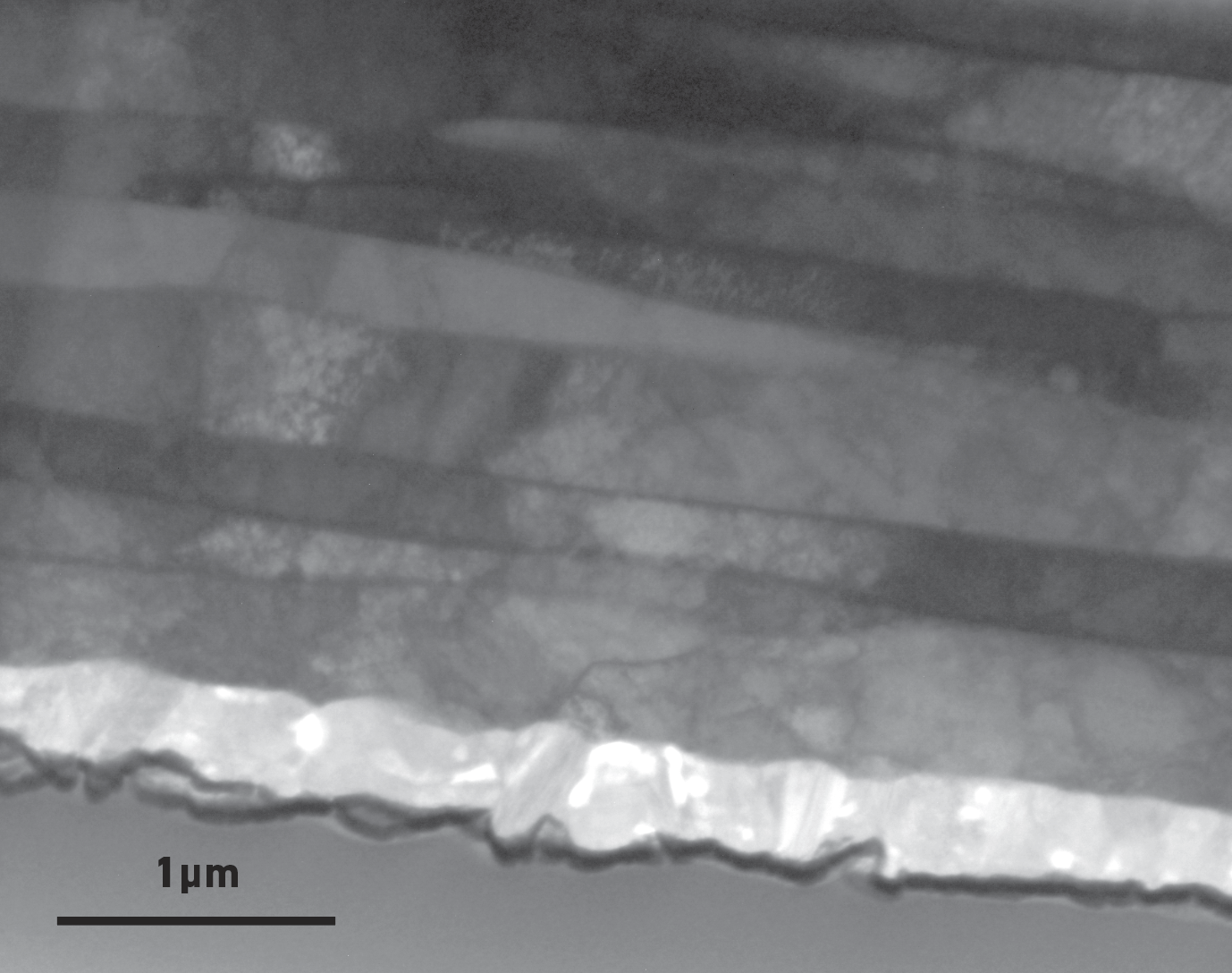 Focussed ion beam prepared cross section showing the MoO3 film (white), grown on a Mo substrate. The average thickness of the film was measured by performing an elemental line scan across the section.

To ensure the thickness of the MoO3 was optimised in delivering the functions of light capture, energy storage and conversion, the researchers employed microscopy in Microscopy Australia’s UNSW Sydney facility. They prepared a thin slice of the film with a focussed ion beam for examination in a transmission electron microscope and confirmed that the optimal thickness of 300 nanometres had been achieved.

This newly synthesised battery terminal is a crucial step in realising a lightweight, solar-rechargeable phone. It would eliminate the need for supplying and carrying phone chargers, greatly reducing production costs and enhancing phone portability and effectiveness.

The growing mobile phone industry is estimated to have contributed $USD 3.3 trillion to global GDP in 2016.

This innovative research into consolidated mobile phone functions and components will help to leverage this global market, yielding increasingly convenient and greener devices.

Silhouette of young man with mobile phone on the beach at sunset.